Lectora Inspire, Lectora Publisher, and Lectora Online include the option to submit your Test, Quiz, Survey, or Form Results to a Google Form that will create a Google Drive spreadsheet with all of the results listed. You can use a spreadsheet that you control on Google Drive to collect Lectora data instead of or in addition to using an LMS or custom server script.

This process will be updated in an upcoming release (currently planned for Fall 2018) of Lectora Inspire/Lectora Publisher/Lectora Online.

Before continuing this article please take note of these important pieces of information:

We’re going to use Lectora Inspire and a Test as an example but the same steps would apply to Lectora Publisher or Lectora Online and a Survey or Form could be used in place of the Test.

The next thing that you will want to do is download one of the provided templates. Three templates are provided to meet your needs. Choose from the following:

For this example, we will be using the Lectora Test/Survey Submission template.

The next step that we will want to do is grab the URL for the form. The URL is what will tell the course to send the test results to your specific form on your Google account. To do this:

For more information about the settings and options within Google Forms,  please reference Google’s help documentation: https://gsuite.google.com/learning-center/products/forms/get-started/#!/. Not all options may be supported when used in conjuncture with Lectora so you’ll always want to test the functionality before publishing and sharing with your audience. 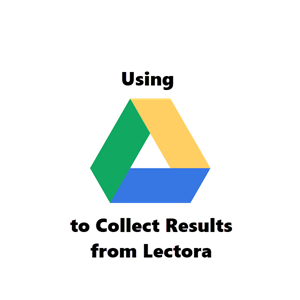